A US-China trade deal might not be enough to spark a recovery in corporate spending, according to Bank of America Merrill Lynch.

The original drivers of the trade war remain despite the two sides inching closerto some form of a deal in recent weeks, the firm’s analysts wrote Friday.

“We think trade-war pain is high enough to motivate a ceasefire for the US election year, but the underlying motivation for the war remains,” BAML said. “Businesses that have been holding back investment due to trade-war concerns know this and will likely have a tepid response to a ceasefire.”

The spat began as an attempt to strike more favorable trade terms and to shrink the US trade deficit, according to BAML’s analysts. The graph below shows the US is still experiencing a meaningful trade deficit as percentage of gross domestic product. 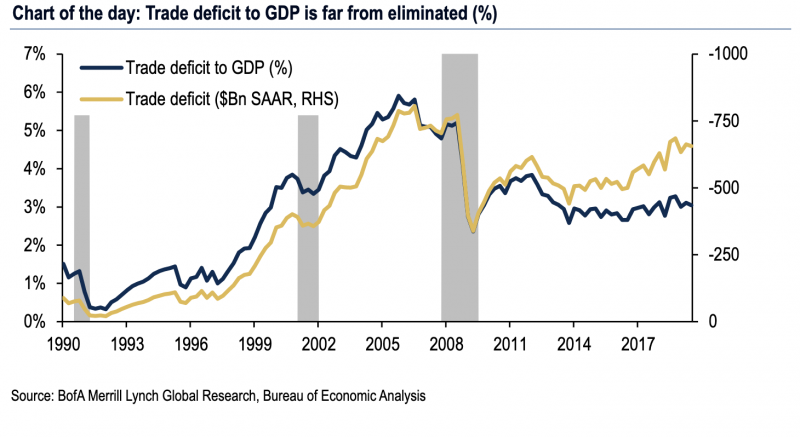 The firm also found that since the trade war heated up in March 2018, the country’s merchandise trade deficit has grown in dollar terms and only shrunk slightly compared to GDP.

The widening deficit could be a result of several factors including falling Chinese demand for US products, a structural imbalance between US spending and output, and trade war uncertainty boosting the dollar, BAML said.

“The trade war undercut confidence and global growth, hurting US exports,” the analysts wrote. “Regardless of the exact cause, the deficit is not going away and the proposed skinny deal would have a very small impact.”

The US and China have continued to negotiate an interim trade agreement in the past few weeks. White House advisers said last weekthat while progress has been made toward a deal, there are still important details to be worked through.

Some of the main points of contention have been whether any tariff rollbacks should be included in the first part of the interim agreement and the rules around forced technology transfer.

Tariffs are scheduled to ramp up on more products starting December 15 pending a resolution between the two countries.